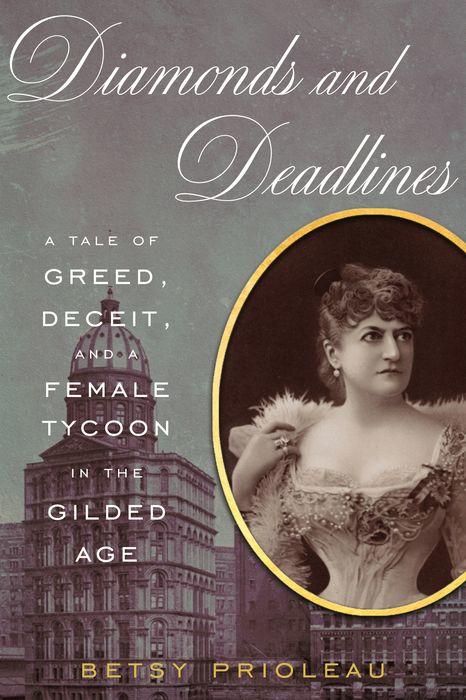 Diamonds And Deadlines
and Seductress

A Tale of Greed, Deceit, and a Female Tycoon in the Gilded Age

“They just don’t make characters like this anymore. Kudos to Prioleau for her gallant historical rescue mission.” – Kirkus

The first major biography of the glamorous and scandalous Miriam Leslie—a titan of publishing and an unsung hero of women’s suffrage. A fantastic Gilded Age story that speaks to the important social issues of our time.

Reviews & Praise
for Diamonds and Deadlines

“An appropriately twisty tale of someone trying to outrun her origins. . . . Her story sparkles, as intoxicating as a champagne fountain that somebody else is paying for.”
―The New York Times Book Review

“[An] extremely well-researched biography . . . Prioleau is especially strong on context, bringing Gilded Age New York to vivid life. Her book is also the story of a woman who took on men at their own game—and beat most of them. This is an extraordinary life, well told.”
―Anne de Courcy, The Telegraph (starred review)

“Ms. Prioleau brings this forgotten woman vividly to life. . . . Along the way, she provides a wider picture of the society Miriam inhabited, with its extremes of affluence and penury. . . . Part of the pleasure of the book is the Kim Kardashian factor—reading about a woman who breaches social norms and succeeds on her own terms.”
―The Wall Street Journal

“High praise to Prioleau for so vividly and incisively telling the whole dramatic story of this ‘titanic vanguard figure.’”
—Booklist (starred review)

“They just don’t make characters like this anymore. Kudos to Prioleau for her gallant historical rescue mission.”
—Kirkus Reviews

“The fascinating true story of the first publishing titan in America—the forgotten Mrs. Frank Leslie, a Gilded Age journalistic powerhouse who led a life of intrigue, scandal, and grit. Diamonds and Deadlines takes us inside a world of larger-than-life characters, cinematic scenes, and dramatic exposés. Mrs. Leslie, a legend in her time, was not who she seemed. Betsy Prioleau restores this fabulous, pioneering woman to her rightful place in history with novelistic flair and zest.”
—Arianna Huffington, Founder & CEO, Thrive Global

Women Who Ravished the World and Their Lost Art of Love

Mary Plummer Clemenceau, American wife (and victim) of Georges Clemenceau, the great French prime minister and diplomat, 1849-1922. After Clemenceau married Mary, pictured here as a Renaissance chatelaine, he parked her in the family chateau with three children, and disported with his many mistresses. When he caught her with her children’s tutor, he put her in jail for two weeks, sent her back third class to America, and divorced her. She later returned to Paris where she prospered as a writer, guide, and purchasing agent for American films. ... See MoreSee Less

The scandal, the drama, the most powerful woman in the Gilded Age. Hear all about it!
w/ Betsy Prioleau
... See MoreSee Less